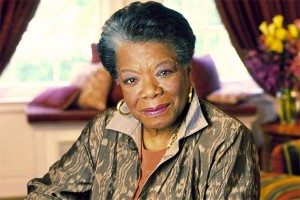 This week, the world lost a talented and inspirational figure in the passing of Maya Angelou. While Angelou is best known for her powerful work as a writer and poet, she was dedicated a great deal of her life to charitable contributions and activism.

Angelou was born in St. Louis, MO in 1928. Growing up as an African American in the south during the era of Jim Crow laws, Angelou bore witness to unimaginable cruelty and hate. Her seminal book “I Know Why the Caged Bird Sings” gave a detailed account of the hardships she and others faced during that time. At the time, her writing gave a voice to a marginalized people who were unable to speak out for themselves. Even today, her body of work stands as a reminder of what humanity is capable of at its worst.

Her career, on the other hand, is an example of what we are able to accomplish through perseverance and strength of will. Coming from a life of poverty and segregation, Angelou was able to accomplish so much. Her writing brought her worldwide acclaim, receiving a Pulitzer Prize as well as three Grammy Awards for Best Spoken Word Albums of her books. Angelou even gave a reading at President Bill Clinton’s first inauguration, and received the Presidential Medal of Freedom in 2010, the country’s highest civilian honor.

Playing a pivotal role in the civil rights movement, Angelou worked alongside the likes of Dr. Martin Luther King, Jr. and Malcom X to fight for equality. With her gifts, Angelou allowed us to view the world through her lens and reevaluate the way we treat our fellow man.

While the world is aware of the contributions Maya Angelou gave to the literary world, her work as a philanthropist is less known, but equally worthy of remembrance. Angelou worked with Cheerful Givers, a nonprofit organization that provides birthday gift bags through shelters and food shelves to disadvantaged, needy children. Angelou was also a supporter of Hands on Nashville, a recognized leader in programs, partnerships, and services that maximize volunteer impact for the greater Nashville community.

Angelou wrote a great deal on the subject of charity, but one quote in particular stands out. “I have found that among its other benefits, giving liberates the soul of the giver.”

We at Civic Duty mourn the loss of Maya Angelou. She was an artist, a humanitarian, and an inspiration. If you would like to donate to one of the causes Maya Angelou supported, you may do so at http://www.cheerfulgivers.org/ and http://www.hon.org/