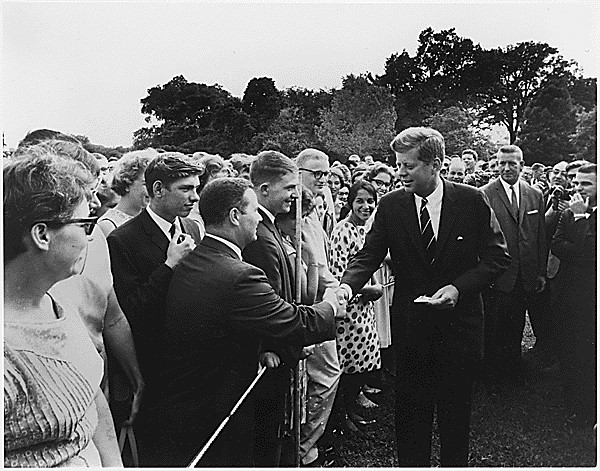 In today’s blog entry, Julian Omidi speaks about the current state of the Peace Corps, one of the cornerstones of President John Kennedy’s administration and a major part of JFK’s enduring legacy.

For the past five years, officials at the Peace Corps have been compiling data about which U.S. states produce the most volunteers for the organization. Still a shining example of President John Kennedy’s effort to use U.S. resources for building world peace, the Peace Corps gets most of its volunteers from JFK’s old stomping grounds in the Northeastern U.S.

According to the Peace Corps’ annual report, Vermont is the clear winner of the volunteering championship, having logged the most volunteers for three out of the last five years. A Peace Corps recruitment spokesperson noted, “Vermont is the happy hunting ground for Peace Corps. These small states really overproduce for the number of people who live in them.”

Peace Corps ranks cities and states based upon per capita volunteers, measuring how many people sign up per 100,000 residents. Vermont was number one this year, followed by Washington, D.C., Washington State, Colorado, New Hampshire, Idaho, Montana and Oregon. For cities and major metro areas, the top three volunteer sources were New York City, Washington, D.C., and Los Angeles.

For some unknown reason, with very few exceptions, small states tend to produce the greatest number of volunteers per capita. And because so many universities now emphasize community service, the job for Peace Corps recruiters is that much easier.

There has never been a better time to join up with the Peace Corps. In fact, the organization’s recruitment levels are at a two-decade high. Never before has there been such a focus on the planet as a true global village. If you are interested in signing up, officials say that you should be resilient and willing to develop strong multicultural skills.

It’s hard to imagine that the Peace Corps has been around since the 1960s, and has sent so many volunteers all over the globe. Some may remember that President Carter’s mother was a long-term volunteer well into her later years. For those with a strong yearning to help their fellow human beings, there is probably no better place for young people to get started than the Peace Corps.

Here’s to the Peace Corps, still going strong after all these years.

The Omidi Brothers, Julian Omidi and Michael Omidi, are co-founders of several charities, including The Children’s Obesity Fund and Civic Duty.