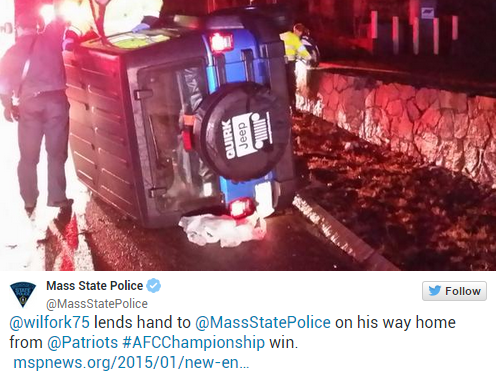 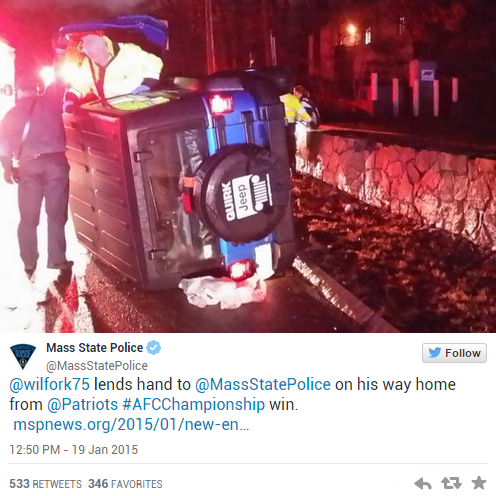 In today’s blog, humanitarian Julian Omidi recognizes the heroics of star athlete Vince Wilfork, who rescued a woman from an automobile accident on his way home.

In this day and age, many famous celebrities take their success and popularity for granted.

Last week, however, Vince Wilfork, a star defensive tackle for the New England Patriots, proved that your civic duty to others far outweighs your success, no matter when you are presented with the opportunity to lend a hand.

On Jan.18, on one of the biggest stages in sports, Wilfork stole the spotlight. Not for what he did on the field, but what he did off the field. After the AFC championship game, during which he helped the Patriots advance to this year’s Super Bowl, he performed something far greater than anything he could have done in the stadium.

While driving home from the game, Wilfork stopped at the scene of an overturned vehicle. According to the Massachusetts State Police, Wilfork helped pull a female driver out of a Jeep Wrangler on Route 1 in Foxborough, sticking around to make sure she was okay.

“It wasn’t a big deal, just seeing someone that needed help and helping,” remarked the modest Wilfork afterward.

For some people, Mary Ellen Brooks, the 38-year-old woman who Wilfork pulled to safety, would have been no more than a mere stranger in an accident. Just finished with work, some people may have just cruised on by, trying to get home and thinking, “Someone else will help.”  In the aftermath of a game that many football players work their whole lives to get to, Wilfork illustrated that there are far more important things in life than personal comfort.

No amount of exhaustion prevented him from embodying civic responsibility. He didn’t let his emotions prevent him from helping save another life. For Wilfork, it seems, helping those most in need is an ingrained trait. That’s how it should be for all of us.

We are all too familiar in our society with innocent bystanders who choose to look away and avoid the reality of the situation around them. Wilfork took the road less traveled and capitalized on acting swiftly, not overthinking what was so clearly the right thing to do. Seeking nothing in return, he performed a selfless act of which we should all take notice.

Brooks was charged with driving under the influence and should be grateful that Wilfork arrived on the scene when he did. With many celebrities and athletes today taking advantage of the “cyber age,” whether through Twitter or other social media platforms, you almost never get to know the actual human being. It’s rare to get a man of Wilfork’s stature do something so morally right.

Wilfork’s good deed serves as a reminder that helping those in need is anyone’s responsibility at any time. Actions often speak louder than words. Athletes get attention because of the way they perform in their respective sports: win big games, get big fame. Wilfork’s performance that night, however, was for much higher stakes. We need to applaud the shining example he’s set forth for everyone.

(Julian Omidi, along with his brother, Dr. Michael Omidi, and mother, Cindy Omidi, are philanthropists who founded Civic Duty, as well as various other charities.)